On October 29, the KHMU and the branch of Incheon St. Mary’s Hospital at Catholic University of Korea and the fired worker Hong Myeong-ock agreed to the conclusion that issues of fired workers shall be resolved and union activities shall be guaranteed. With that, the 12 year-long oppression on labor union and the five year long fierce struggles ended.

The agreement was reached at an acceptable level after organization-level discussions among the fired worker herself, the KHMU and civic taskforce team at Incheon.

The core at the agreement contains guarantee of union activities, extension of time-off of union branch head, paid union activities of executives and congress members. With this, the Incheon St. Mary’s Hospital opened a new chapter toward growth and changes, putting away the industrial ill practices in the past.  Under the leadership of the branch head Hwang Gyeong-hee, the executives set up a new steering committee, thereby the number of union members increasing dramatically as a powerful field-centered organization.

The advisory committee member Hong Myeong-ock at the KHMU noted, “I would appreciated brothers and sisters at the KHMU and its branches as well as international comrades for their continued warm cheers, support and solidarity up until today when we made this accomplishments.” 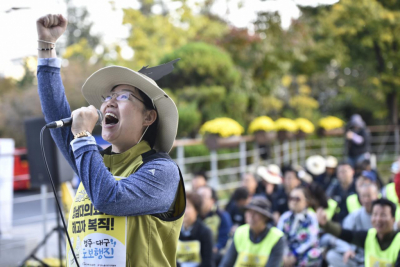