Park Moon-jin(leadership member at the KHMU), a fired worker by the Yeongnam University Medical Center has been protesting on the 70 meter high rooftop of the medical center’s building for 6 months now, starting on July 1st.

In 2006, the KHMU branch at the Yeongnam University Medical Center was in a partial strike for three days, requesting a better staffing and non-regular job positions’ normalizing. Taking this for a reason, the Center’s management fired 10 executive members of the union branch, put 18 under suspension from their jobs and reduced 10 workers’ salary amount, which are very severe and harsh punishments.

Under the crackdown of the management, around 800 union members left the KHMU. Most of fired workers in those days were reinstated. But three are still out of the job and they have been struggling for 14 years now. 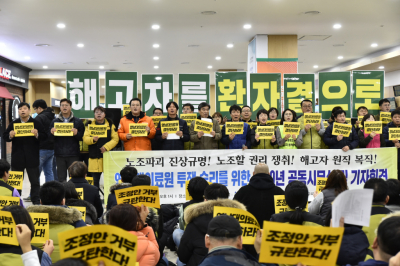