The KHMU finalizes the year 2021 requests and campaign directions

The KHMU finalizes the year 2021 requests and campaign directions

The Korean Health and Medical Workers’ Union (The KHMU, President Na Soon-ja) resolved to fight for establishment of an infectious disease response system, increases in public medical services, eradication of illegal practices in hospitals, expansion of employment levels in medical services, improvement of shift work systems and adoption of the four-day workweek system. To that end, they will develop a general strike in September this year in case that demands are not accepted and the requests mentioned above will be all included in the agenda of industry-level collective bargaining.

Starting from 1:00 PM on April 29, in the virtual ad-hoc congress, the congress members (207 participants out of 210 in total) remotely discussed where they focus on in their fights going forward and made a final decision to have these three requests: 1. increase and beef up public medical services, 2. expand employment levels in hospitals, 3. improve industrial relations and ensure labor union activities. 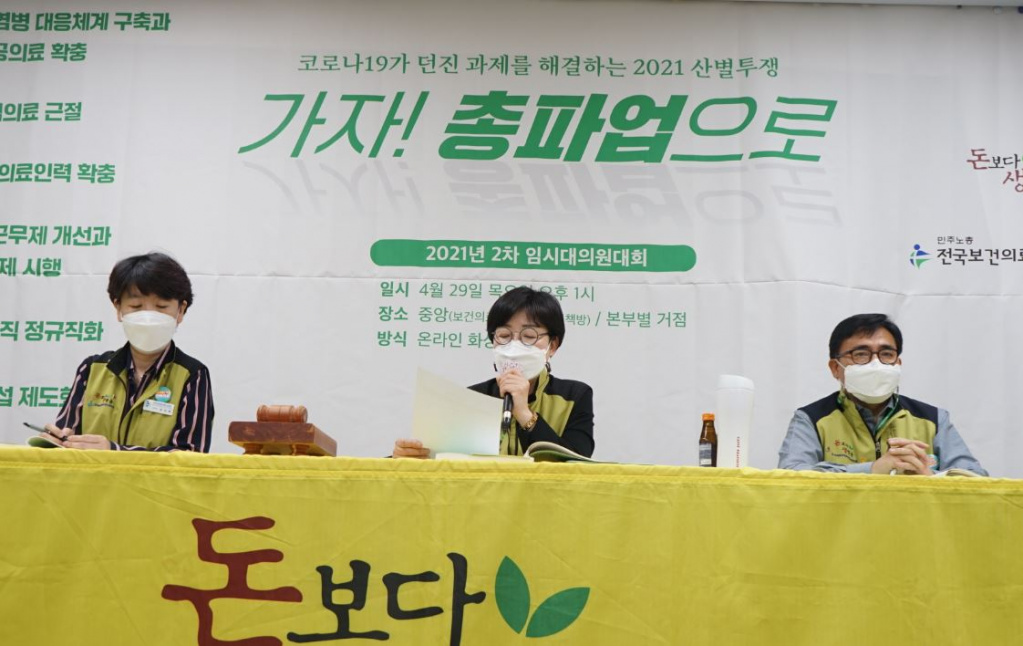 The Union’s industry-level negotiation will take place during May and with its first formal bow with employer representatives on June 2, it will run the negotiations every Wednesday according to their timeline. Each branch of the Union will finalize its own requests by the end of May and branches will also negotiate with their employers in parallel with the central negotiations of the Union. In case that the Union and employers fail to reach an agreement at the industry-level negotiations, the Union will go into a general strike in early September after going through dispute mediations in August.

The KHMU President Na Soon-ja said, “Health and medical services require workers to do toughest physical and mental labor, way more than any other services as well as even night shift work. Our union of 80,000 members should firmly mobilize our capabilities in resolution this year for more and better public medical services, increased number of workforces in medical institutions, improved shift work systems, regularization of irregular job positions and reformation of health and medical laws and regulations.” She also added, “Such issues that we raised this time are what we have already been discussing in public domain multiple times for so long. We participated in public sessions with governmental agencies and emphasized the problems, too. Every time, the government said they understood our situations but has never come up with any solutions since then. It is high time to fight at a large scale now.” “ Let’s all, 80,000 workers in our union, struggle together to advance happier workplaces for workers,” she appealed to the congress. 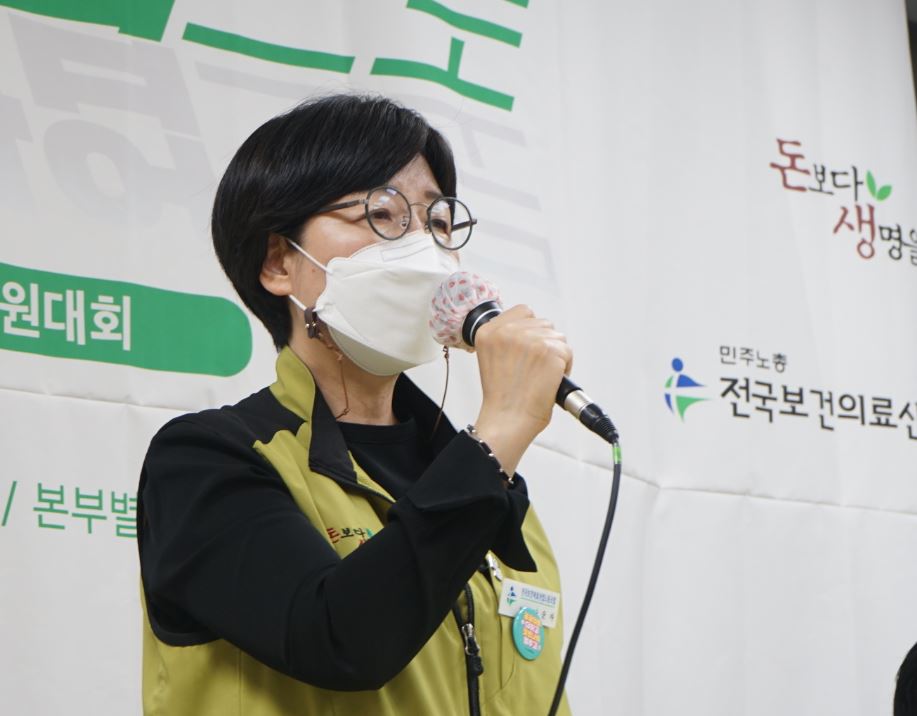 In the fights and discussions with the government, the KHMU will also send a special focus on COVID 19 agenda, i.e., overcome COVID-19 crisis and establish an infectious disease response system. The Union will publicly raise voices on these issues and endeavor to bring about substantial results during negotiations. At the same time, they will not spare their energy in holding rallies and strikes, one of which is the industry-level general strike for their requests to the government.

It is noteworthy that based on the rationale that infectious diseases and its spread come from climate crises, for the first time in its history, the Union included such requests as declaration of joint-statement on climate issues by labor and management as well as joint activities against climate change. To this end, the Union insists that trainings and educations on how to respond to climate changes should be provided to the entire workforces on a regular basis; labor and management should develop climate campaigns for patients and their caregivers and prepare joint action plans to establish response systems in case of infectious diseases outbreaks and medical disasters, reduce greenhouse gases, and use more renewable energy and adopt more efficient ways to use energy.

In addition, the request on wage was also finalized. The Union decided to request a 5.6% increase of wage against the total pay level (201,000 KRW per month on the basis of fixed salary) and discuss this in industry-level negotiations with employers of each hospital. They will also request the minimum wage should set at 10,702 KRW per hour, effective from year 2022 onward. Separate from those mentioned above, the congress also decided in consensus to announce the Union’s position that the government should support the proposal of COVID-19 vaccine patents suspension and passage of its resolution at the national assembly for global solidarity and international cooperation. Currently, the intellectual property rights owned by big pharmaceutical companies have limited vaccine productions and uses around the world. 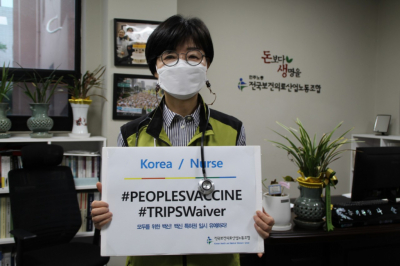 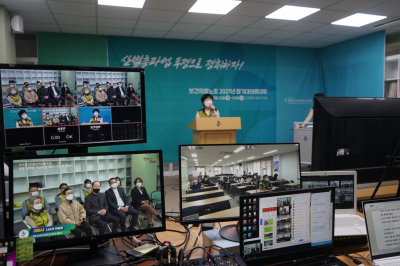