Around 5,000 nurses from all over the country marched to the Seoul Railway Station from Gwanghwamoon Square.

They raised their united voice:

“Nightingale with a hammer is required to reform the current medical system!”

“Institutionalize a standard for an adequate number of nursing staff to root out the practice that pushes a deadly intensive labor!”

“Eradiate the illegal medical practices and secure a sufficient number of medical doctors!” 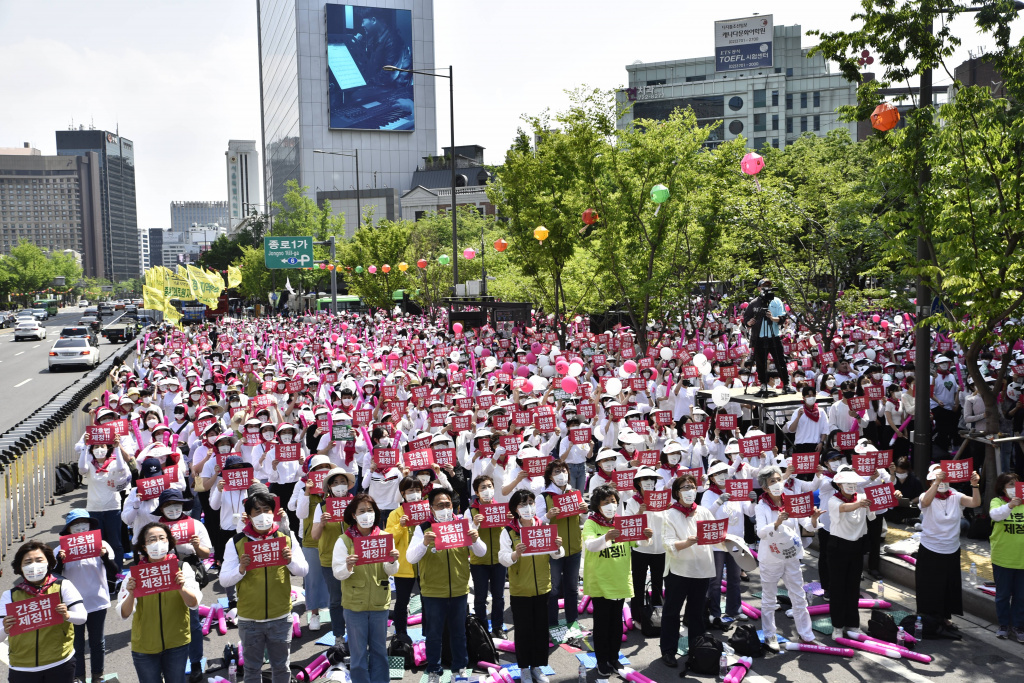 On the occasion of the 51st International Nurse Day on May 12, 2022, the Korean Health and Medical Workers’ Union (KHMU) jointly hosted a resolution rally to urge the political community to enact the Nursing Act, for the first time with the Korean Nurse Association (KNA).

In the rally, the nurse protesters presented three demands: ▲ enactment of the Nursing Act to ensure universal health ▲ an adequate ratio of the number of patients per nurse for patients’ safety ▲ increase in the number of medical college students and clarification on job descriptions and borders between nurses and medical doctors to root out illegal medical practices. And they urged the government and the National Assembly to take concrete measures to meet the demands.

Around 5,000 rally participants include nurses from the KHMU, the KNA as well as students of nursing major from nationwide.

With Song Keum-hee, General Secretary of the KHMU being a moderator, the rally began with a silent tribute to COVID-19 victims and medical staff. President Na Soon-ja at the KHMU said in her remarks, “Nightingale lifted not only a light but also a hammer, 170 years ago. We nurses should demand institutional reform for lives of patients and when our voices are not heard, then, we must be ready to fight.”

She also added, “Last year, with a sense of urgency, around 80,000 union members joined in the general strike and eventually reached a historic September 2 Government – Labor Agreement, which includes institutionalization of the number of patients per nurse, improvement in work shift system, deployment of education and training-dedicated nurses, and eradication of illegal medical practices.” In addition, she emphasized the importance of legal ground such as a nursing act to fundamentally resolve the current challenges.

The President Shin Gyeong-rim at the KNA also shared the same position as Presdient Na’s at the KHMU, firmly insisting that no more controversies are needed but only a fast legislation of the Nursing Act should be the answer. Plus, she also added, “The government should invest in nurse education to raise qualified and skillful nurses, provide adequate remuneration as well as decent working conditions and engage nurses in every policy-making process. Also, the new administration must implement the conclusion of the September 2 Agreement, which is endorsed by the society.”

Nursing major students and in-service nurses also added their words to the two presidents’ remarks. Lee Sun-Ah, a nurse at the National Medical Center said, “Nothing changed from 10 years ago in hospitals. One nurse should take care of over 20 patients at once. Having a lunch as scheduled is not something that we can even imagine. Worse more, we are struggling under such a heavy pressure as we also have to work on some of the jobs that medical doctors are supposed to carry out. In addition, in the COVID-19 circumstance, we nurses were forced to work like a moving center, a cleaner, a doctor, a delivery driver, and even a funeral guide. What’s wrong with a nurse working just as a nurse and a doctor doing its own jobs? I can’t understand why they have been opposing legislation of a nursing act which will serve to ensure patients’ safety. The government and the President should support enactment of the Nursing Act as promised.”

Then, after a symbolic ceremony of breaking a large gourd, nurses marched for about 2.5km to Seoul Railway Station from Gwanghwamoon Square, passing Sungnyemun Gate, holding white and purple balloons with the words ‘Enactment of Nursing Act’ written on them. 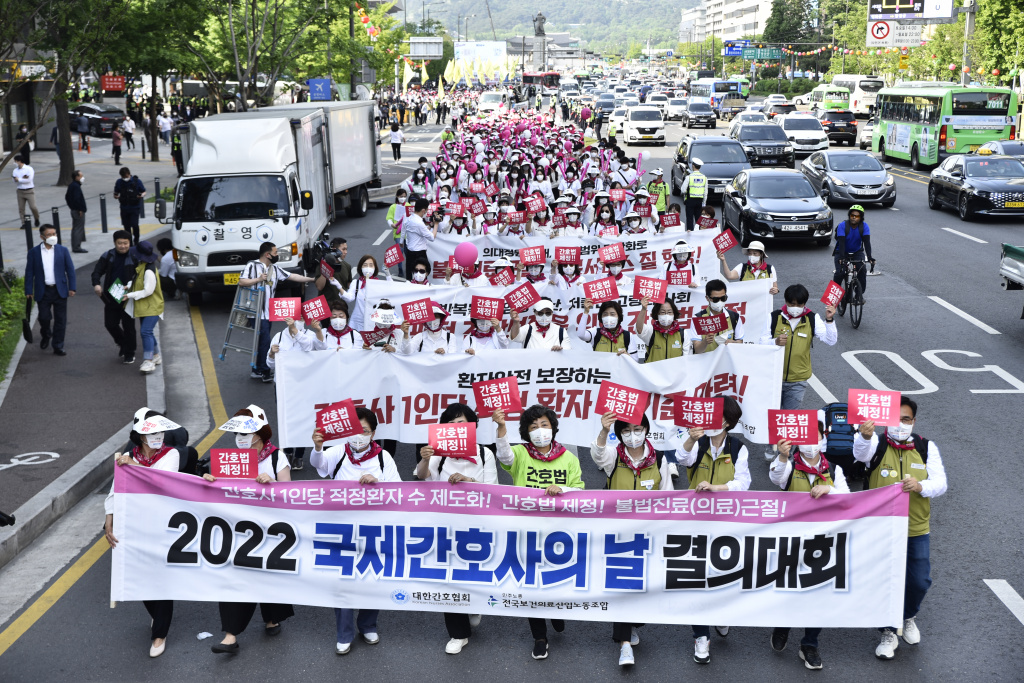 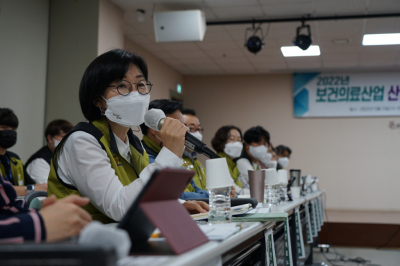 KHMU started the industry-level collective bargaining for the... 2022.05.23by 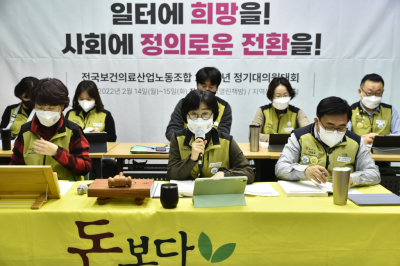