Members of the Korean Health and Medical Workers’ Union hold an emergency press conference at their headquarters in Seoul’s Yeongdeungpo District on Monday afternoon, where they shared testimonies from the front lines and called for an overhaul of the COVID-19 medical response system. (Yonhap News)

Those working on the front lines of South Korea’s battle with COVID-19 made their frustrations known on Monday afternoon during a press conference at the Korean Health and Medical Workers' Union (KHMU) in Seoul’s Yeongdeungpo District. Those present shed light on the lack of medical staff needed to take care of a growing number of patients.

Ahn Su-kyeong, a nurse at Korea’s National Medical Center, shared the following: “The current situation at the hospital is complete mayhem, a battlefield. As the number of critically ill older patients increases, what is required [of hospital staff] has also increased. Already it’s been two years since the burden of cleaning hospital rooms and bathrooms, and distributing food has fallen to nurses, leaving us no time to even eat. Those nurses working with patients on their deathbeds and dealing with their corpses are struggling with fatigue and depression not knowing when they will be able to get out of the current situation. What exactly has the government been doing for the past two years?”

A fellow nurse at Seonam Hospital in Seoul, Kim Jeong-eun, stated: “All 204 beds at Seonam Hospital in Seoul, a dedicated COVID-19 hospital, are in use by confirmed cases. The hospital not only handles the confirmed cases, but also operates screening clinics, vaccinations and treatment centers, all while also managing patients waiting at home before they are assigned a hospital bed. This is only made possible by working employees to the bone. However, around half of the patients receiving home care did not receive necessary equipment such as oxygen meters, and so forth.”

Kim Hyun-tae, head of the labor union at Wonju Severance Christian Hospital, said, "The government says that up to 10,000 [daily] COVID-19 patients can be handled if up to 4% of hospital beds are mobilized, but no matter how many beds are secured, without skilled medical personnel, medical services cannot be provided at the moment.”

He continued, “The government is only focused on the number of beds, but this is the wrong point to focus on. Even if you look at the executive orders, there is no talk about manpower, yet treating and caring for patients is something that has to be done by human beings.” 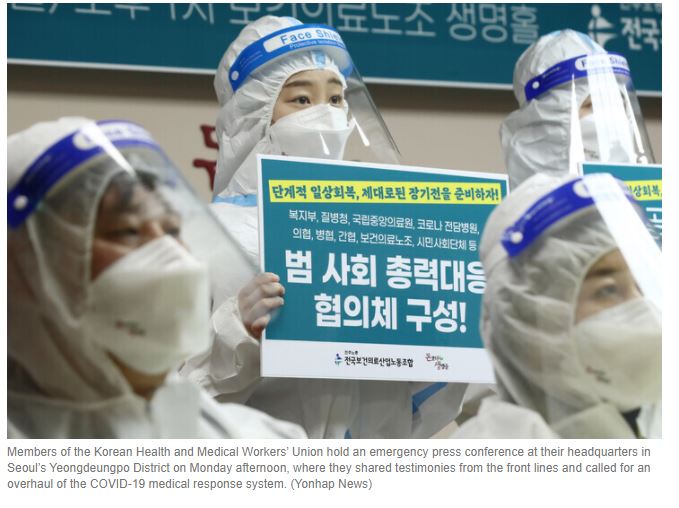 The KHMU suggested putting an immediate two-week halt to the government’s current restriction-easing measures. They are also calling for the government to increase the number of medical personnel and to establish a new COVID-19 response system in which the public and private sectors work together. The KHMU, which has members from over 200 medical institutions nationwide, made the suggestions after holding meetings with other union leaders of hospitals providing care to COVID-19 patients throughout the country.

“Experts predict that COVID-19 will last for more than three years, so we need time to come up with long-term measures,” says Na Soon-ja, president of the KHMU. “It is necessary to establish a public-private total response system in which the public sector — which accounts for only 10% of the overall medical system, but is taking on the brunt of the burden — can work together with the private sector, which is actually responsible for the remaining 90%,” she said.

Doctors also agreed that the current phased recovery plan should be halted. The Korean Society of Infectious Diseases and other medical associations issued a joint statement on the same day, saying that, “The government announced measures such as limiting the number of private gatherings on the Dec. 6, but the intensity of the measures is low and it has not led to a decrease in the spread [of COVID-19].” The statement continued: “It is a time when [the easing of restrictions] needs to be stopped in order to secure the response capacity of the medical system.”

On the other hand, the government is planning on monitoring the situation for the next three days as the expanded vaccine pass system goes into effect. Son Young-rae, head of the Central Disaster Management Headquarters' social strategy team said, “We will discuss [emergency measures] by comprehensively evaluating the proportion of older patients and the capacity of the medical system while watching how [disease control indicators] come out this week on Monday, Tuesday and Wednesday.”

Meanwhile, metrics of disease control in the country are continuing to deteriorate. The Central Disease Control Headquarters (CDCH), evaluated the COVID-19 weekly risk levels in the second week of December (Dec. 5-11) as “very high.” The risk level was the same nationwide, regardless of metropolitan or non-metropolitan areas.

Lee Sang-won, director of epidemiological investigation and analysis at the CDCH, explained that “The capacity for the medical system to respond in metropolitan areas continues to exceed its limits while there is also a risk that the limit will soon be reached in non-metropolitan areas, so it is necessary to expand at-home treatment options.”

Health and Welfare Minister Kwon Deok-cheol noted that the medical system was reaching its limits, continuing, “Following three executive orders to secure more hospital beds, [the government] issued an executive order for non-metropolitan hospitals last Friday, but if the spread of the infection continues, we may be in for a ‘state of emergency’ in which the [medical system] can no longer manage.” 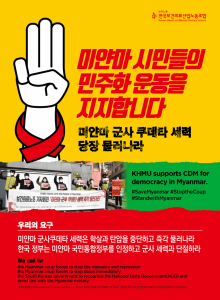 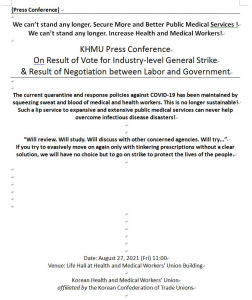