A Korean unionist has welded himself into 1-cubic-meter “steel prison” on the dock of a shipyard as part of an industrial action for better wages Employment and Labor Minister Lee Jung-sik (left, in hardhat) speaks to Yu Choe-an, the deputy head of the shipbuilding subcontractors union branch who is currently staging a sit-in in a 1-cubic-meter metal box on the main dock of a shipyard in Geoje, on July 19, the 28th day of the sit-in. (pool photo)

Two of the most powerful law enforcement figures in South Korea appeared in the troubled skies above the Okpo shipyard of Daewoo Shipbuilding & Marine Engineering on Geoje Island, southwestern Korea, on Tuesday afternoon. 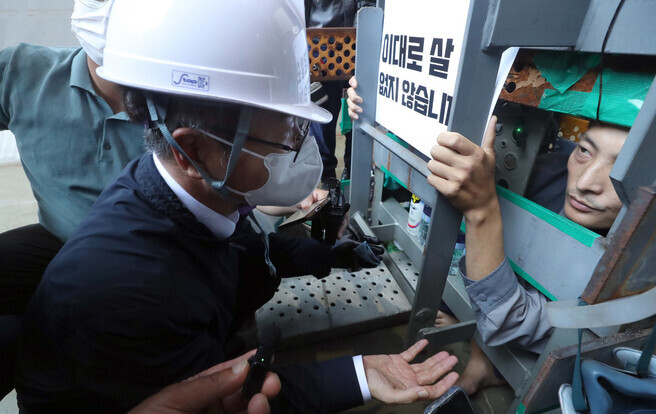 A helicopter carrying Minister of the Interior and Safety Lee Sang-min and Yoon Hee-keun, who has been tapped to serve as commissioner general of the National Police Agency, circled above the site of a strike by the Geoje, Tongyeong, and Goseong shipbuilding subcontractor branch of the Korean Metal Workers Union.

From their perch in the sky, Lee and Yoon were looking down at Yu Choe-an, a subcontracted worker who has enclosed himself in a “steel prison” — a welded metal cage measuring 1 cubic meter — at the bottom of an oil tanker being built on dock No. 1 of the shipyard. Above the cage is an aerial protest put on by six of Yu’s colleagues, who climbed a ladder to reach a structure 15 meters in the air.

The intimidating sound of the authorities’ raw power, represented in this case by the thump-thump-thump of the helicopter rotors, drowned out the strikers’ cries for higher wages and a guarantee of their right to a union.

It has already been 49 days since the shipbuilding subcontractor union branch initiated its strike on June 2, as well as 28 days since Yu, deputy head of the branch, and his six colleagues occupied the dock on June 22.

Yu Choe-an, the deputy head of the shipbuilding subcontractors union branch who is currently staging a sit-in in a 1-cubic-meter metal box on the main dock of a shipyard in Geoje, speaks to Employment and Labor Minister Lee Jung-sik on July 19, the 28th day of the sit-in. (pool photo)

This amounted to final negotiations for preventing a showdown between a president who seems to have no scruples about sending the police into the cramped shut-in and subcontract workers who are determined not to give up, fortified with last wills and containers of paint thinner.

Dock No. 1 is dotted with massive equipment destined for ships. The sit-in itself occupies part of the hull of an oil tanker, which measures 30 meters in height, with only one railing separating the protesters from the ocean.

To reach Yu’s cage at the bottom of the hull, you have to go down a steep, narrow ladder.

“Koreans, I’m sorry. We want to live,” reads a poster attached to the steel cage. Yu is rather tall, at 180 centimeters or 5 feet 10 inches, and his bare legs protrude from the slats of the cage.

Minister of Employment and Labor Lee Jung-sik, who descended from the helicopter and showed himself to reporters before the police commissioner and interior minister, walked up to the steel cage.

“If you quickly end your sit-in, I’ll do my best to help you achieve your demands peacefully,” said the minister, who spent 30 years as a labor activist.

But Yu responded, “We can’t end the sit-in. Not once has [the government] kept its word after we called things off first.”

Yu also responded to the government’s threats to use force against what it calls an “illegal occupation.”

“During my time working at the shipyard, I’ve never seen people asking about how they can obey the law. This problem has occurred because of people looking for various loopholes to exploit the law,” Yu said.

Yu said that subcontracted workers were harmed by the illegal steps taken by employers during the downturn in the shipbuilding industry that began in 2016 and that their struggle was unavoidable now.

“The cage that Yu is in right now represents the reality of Daewoo Shipbuilding. Should someone with skills honed over two decades have to build their own cage as he has?” said Kim Hyeong-su, head of the subcontractor union branch, to the labor minister.

Four-way negotiations between management and labor, including both the prime contractors and subcontractors, haven’t made any headway since finally beginning on Friday.

The subcontractor union branch reportedly proposed a 5% wage increase this year and a 10% increase next year, along with an agreement not to press civil or criminal charges for the labor action, which was much more moderate than its initial demand of a 30% wage increase. But as of late in the evening on Tuesday, the fifth day of negotiations, no progress had been made.

“We’ve detected a change in the company’s attitude, but there hasn’t been much of a change in its offer,” said a source with the subcontractors union.

“If you do your best to bring [the negotiations] to a speedy conclusion, we should be able to avoid a disaster,” said the labor minister, who left the relevant bureau chief behind at the scene of the negotiations when he departed.

The subcontracted workers also communicated to Interior Minister Lee Sang-min their concerns about indications that the government might resort to force.

The interior and safety minister told Kim that he understood those concerns.

“While we’re obviously considering the option of sending in the police, we’re weighing that option carefully because of the unintended problems that could arise. The best way to resolve this is through dialogue, but in case that doesn’t work out, we’re looking to see what other options we have,” Lee Sang-min told reporters.