In the temporary congress, the Korean Health and Medical Workers’ Union decided to develop a fight against the performance-based annual salary system and the policy to dismiss low-performing workers. It also confirmed the plan to start industry-based negotiation, which includes wage bargain, in May 2016. The negotiations will focus on a higher number of manpower, anti-law amendment against labor and atypical workers’ issues.

Joined by 200 representatives, the temporary congress was held at 1:00 pm May 3, 2016 at T Art Hall in Yeoui-do, Seoul. In the congress, the decision was made as above.

President Yoo stated in her opening remarks that the performance-based annual salary system and the policy to dismiss low-performers will bring about a huge disaster destroying the public nature of medical services and leading to a raise in medical fee by collapsing the wage system, employment and trade unions. Together with the Korean Confederation of Trade Unions and its affiliated Public Sector Union, KHMU should stop the institution and policy at the risk of the life of democratic unions. To this end, employer-employee discussion conferences at the industry level will take place on May 9 and negotiations at the center level on May 25 and finally, “vibrant white-clad wave” with 3,000 workers will rise as per the schedule and the struggle policy. She asked the representatives to be prepared and focus on this plan.

This year’s priority in the request is to “hire more workers to ensure patients’ safety.” It should be made sure to secure a sufficient number of nurses before institutionalizing the comprehensive nursing-care integration system. In addition, In case of higher-tier general hospitals, the number of patients per nurse should be decreased to four while six for general hospitals and ten for clinics.

Hospitals are the workplaces where female workers are dominated. But, maternity protection is so weak that a so-called pregnancy-rotation policy has been tacitly implemented. Therefore, KHMU decided to demand for “the system to hire more workers for maternity protection” in order to secure chronic manpower shortage due to maternity leave and childcare leave.

In addition, KHMU plans to urge the employers to solve such issues as irregular workers, long working hours, night shift and shift system per se thereby creating an environment where three major respects (respect to patients, respect to workers and respect to labor) are upheld.

The congress also decided to ask for a raise in wage by 7.4% for 2016. In the figure, 1.3% will be a cost to solve issues of manpower shortage and non-regular workers. As for the minimum wage, KHMU will demand 10,000 KRW per hour and 2.09 million KRW per month, which are consistent with the Korean Confederation of Trade Unions.

The first round of the industry-based negotiation is scheduled at May 25. But, before then, the employer-employee discussion conference will take place on May 9 at the Seoul Press Center under the theme of “policies of institutionalization of comprehensive nursing-care integration service, medical service delivery system and decent jobs.” KHMU’s center-level industry-based negotiation with hospitals had been conducted from 2004 to 2008 but since 2009, large hospital employers have not participated in the negotiations, making the practice unstable. This year, however, KHMU expects the center-level negotiations to make progress joined also by large-sized hospital employers. 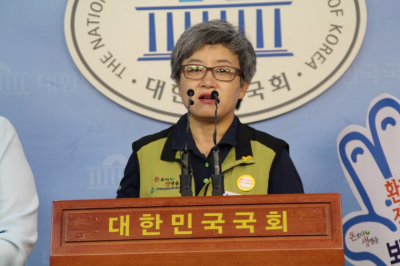 Move the Act supporting Health and Medical Personnel 2016.07.10by 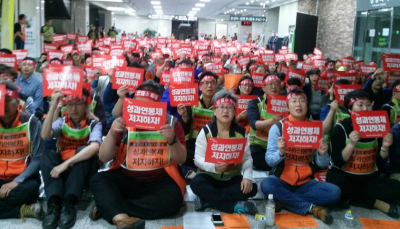