Prosecutors suspect that Park colluded with Choi Sun-shil to support Samsung’s vice-chairman, Lee Jae-yong, rise to the chairmanship, and received “payback” bribes that amount to KRW 29.8B, including the KRW 20.4B Lee pledged to launch the foundation. The Prosecutors’ Office placed the former president under investigation for abuse of authority, coercion, and disclosure of state secrets, and determined a risk of removing evidence. KHMU issued a statement through which it “[welcomed] the prosecutors’ decision to arrest the former president following her impeachment, which has been the call of [to] the millions of the people who took to the freezing streets with candle light in search of truth and justice.” Additionally, KHMU called upon the prosecutor’s office and court to dispense the same level of justice with conglomerate bosses who provided bribes and to others who also manipulated the government. KHMU also urged them to release the president of Korea Confederation of Trade Unions, Mr. Han Sang-kyun, who was arrested and has been imprisoned for a  year and four months for organizing a demonstration against the disgraced administration. Additionally, KHMU demanded that health sector privatization-relevant facts be found, and those responsible for it be punished.

Because of the impeachment, May 9 has been set as election day for the 19th president of Korea. For it, KHMU issued “KHMU Policy Demands for the 2017 Presidential Election” and decided to support a candidate who represents these demands. South Korea is in an age beset by a low birth rate, an aging population, and a high unemployment rate. As the streets overflow with a revolution of people armed with candles, KHMU demands the presidential candidates shape our nation into a place where people live long, healthy lives of 100 years or more, respect labor, and enjoy an improved quality of life.

KHMU’s policy demands consist of five major agendas as follows: 1) creating 500,000 quality jobs within the health and medical sector as part of a job revolution, 2) repairing the Korean medical system to prevent the MERS outbreak from recurring, 3) forming a society in which citizens can live a healthy life without the stress of high hospital bills, 4) establishing a proper employee-employer relationship and encouraging higher employee participation to create a culture in which labor is respected, and 5) eradicating the evil deeply rooted in Korean society as exemplified by the corruption wrought by Park, Choi, and the business conglomerates. On April 7 World Health Day, KHMU held a press conference at 10 in the morning in front of the National Assembly Building. Its banner declared a commitment to “eradicating the evil rooted deeply in Korean medical system, repairing the Korean health and medical system, ensuring the health and medical workers’ rights to vote, and creating a society where people’s lives are prioritized over profit.”

Participants of the conference noted that the coming election should focus on strengthening the public medical system, abandoning the idea of medical privatization, and repairing the Korean public medical system. On the same day, each union branch around the nation hosted a meeting and a promotional activity during the lunch hour. KHMU encouraged union members to take selfies of their activities to spread the word to the public.

Management and workers plan to invite presidential candidates and organize a public debate on April 17. In the debate, the union will propose a “grand tripartite agreement to realize safe working conditions, foster talent and jobs as the basis for a nation with an exceptional health and medical system, and create new jobs.” 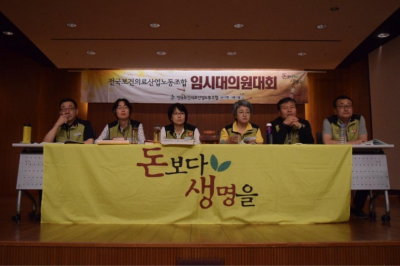 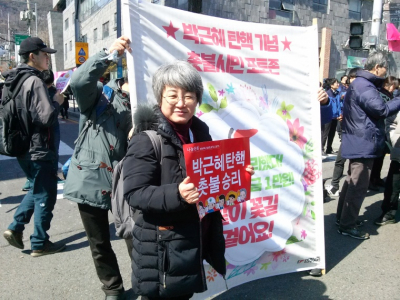